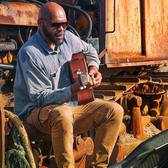 Music with a social, soulful and human commentary

range of styles but rooted in reggae, jazz, soul, dub, and African styles. Mostly based outside

of UK, playing for bands such as Jah Music International, who he recorded an album with in

Jamaica, with Jamaican artists such as Larry Marshall and Dennis Fearon. Iafra performed

with J.M.I for several years, playing in Europe and Africa

After coming back from Jamaica, Iafra took to playing the guitar, started writing songs of his

own. Around this time he started to travel to Africa, firstly going overland, driving from

Europe to Africa across the Sahara to Mali, Niger and Nigeria. On returning released his first

Returned to Africa to play to sold out venues, over a period of 3 years, with the band Rag ‘n’

Boom and Remnant, who were based in Denmark. Rag ‘N’ Boom recorded an album, ‘World

People’, a fine blend of reggae, soul and jazz. Travelled to the U.S to record several other

Throughout this time and over a period of 20 yrs, Iafra has performed and recorded, as

guitarist and vocalist with Arkology, a London based reggae dub outfit; recording several

release called ‘Return of the Dread I’; available on Itunes, Blakamix, Spotify and Amazon.

Also releasing another track this year, ‘All in a day,’ with CMP studios; available on Itunes

Iafra’s style is eclectic, rhythmic and soulful with overtones of jazz, Latin and reggae

Iafra - when the world coms...