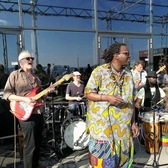 Ussumane 'Balansa' N'djai composes his songs in different West-African languages such as Wolof, Mandingo and Creole; some are in French, English and Portugese.
Furthermore the band plays covers of the best Africans singers.

Balansa was born in Guinea-Bissau , but his parents came from Senegal. Ussumane N’djai, son of a fisherman and a teacher, grew up partly in Guinea- Bissau and partly in Senegal.
At the age of seventeen he was spellbound by the heart-breaking voice of Rui Sangara, a singer in Guinea-Bissau who now lives in Portugal. Influenced by this great artist and by the lead singer Omar Pene of the Senegalese group Super Diamono, Ussumane decided to become a singer and to dedicate his life to music. He moved to The Gambia in 1996 where he worked for five years as entertainment manager in the five star Kairaba Hotel. He studied music first by playing in this hotel with his brothers in the group Dara-G (The School), then he formed his own group, called Mango Bees. Because of the popularity of his song ‘Balansa,’ Ussumane N’djai became then known as 'Balansa'.

The war following the coup d’état of 1998 in Guinea-Bissau has marked his life and his music. He lost relatives and friends in the senseless bombing of the capital Bissau. Songs like 'Mortos sin dunu' and 'He dana no Guine' are an outcry against war and the ensuing poverty in Guinea-Bissau. With his songs and music Balansa wants to counter these negative forces by creating positive vibrations that will bring people together in music and dance.

During his tours in Guinee-Bissau in 2005 and 2007 and in Portugal in 2006, Balansa played with Rui Sangara, Silvestre Gomes, Mario Pussick, Maio Coope and other famous musicians from Guinée Bissau.
In 2007 Ussumane N'djai produced with his group 'The Balansa Vibrations' his first CD, called 'Mortos sin dunu'. This CD became very popular in Guinée- Bissau and is since broadcasted daily on the local radio-stations.

In 2008 Ussumane released his second CD, called 'Sacur na Bulola'. During that year he also made a tour in Brazil with Daniela Mercury.
In 2009 Ussumane toured West-Africa to promote both his CD's and he played there with Dembo Djassi, Mario Pussick, Rui Sangara, Seckou Camara and other artists from Guinee-Bissau.

In 2010 Ussumane started to perform solo without his band, as a singer- songwriter. In this way he won the 3rd price in a talent scouting concours in the Amsterdam night-club Panama.
In 2013 Ussumane N'djai formed a new band called Ussu N'djai & the New Balansa. In August 2013 their first concert was in Poland in the Fama African Festival and in The Netherlands in 2014 in Jazz Podium in Dordrecht.
Since then the group toured in and outside The Netherlands:

In CC Muziekcafé, Amsterdam every month in 2014 and 2015. Brazilian Tours in February and November in 2014, 2015 and 2016 In 2015 in North Sea Jazz Club in Amsterdam: The African Night
From 2015 until now in Café Pllek in Amsterdam
From October 2016 in Blijburg Aan Zee in Amsterdam ( IJburg)
In 2016 in the African Festival in Nijmegen
November 2016 Tropenmuseum Amsterdam.
Indische buurt Festival Amsterdam.
Noorderlicht Amsterdam
2017 Vis à Vis Almere
2017 Kwaku Summer Festival
2017 Psychedelic music and arts festival Leeuwarden