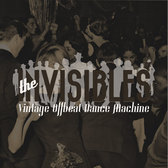 The Invisibles are a Postmodern Offbeat Band. “To put it simply, it’s pop music in a time machine”, like Scott Bradley would say. It’s today’s music, both original numbers and top hits, as they would have sounded if they were recorded decades ago by Jamaican artists in the legendary Studio One in Kingston, Jamaica.

“We like to think of our music as a postmodern evolution of what started in Jamaica in the end of the 50s – beginning of the 60s, when something so incredibly powerful as Ska music, originated from a fusion of Mento, Calypso, Rumba, Mambo, Cha Cha, Caribbean and Latin genres, together with Jazz, Blues, Rhythm & Blues and early Soul from the US and UK, took over the international scenario and settled down to stay. Original Ska, Rocksteady, Blue Beat and Early Reggae have been the foundations of modern Reggae Music, DUB Music, Ragga, Dance Hall, Jungle, Drum & Bass and lately a huge portion of what’s generically called Electronic Dance Music. Through decades since their birth till now, Jamaica’s Offbeat Style has influenced many other musical genres and thousands of artists in the whole world, building a legacy which grows stronger and stronger through the years, generation after generation. There is always gonna be someone playing those amazing classics by The Skatalites, Don Dummond, Lee Scratch Perry, The Ethiopians, Toots & The Maytals, Tommy Mc Cook, Derrick Morgan, Byron Lee & The Dragonaires, and many many more. And there is always gonna be someone keeping the flame burning through the times, offbeat after offbeat”. by Enrico Cioccolini Gotink

All About That Bass

Hard Time Livin' In The Cou...

The Invisibles LIVE in Het Gebouw

Gigstarter over The Invisibles