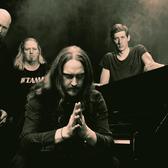 When Peter Berends, Peter Röge and Gerard Manoch started Elizium back in 1991 it was clear a vision had to be translated to sound. The first two years consisted mainly of line-up changes and playing covers of other bands, but then the music started to get shape.

Most of the songs were based on lyrics with themes about fantasy, glory, love and a small spark of hope and needed a distinct sound to translate it to an audience. Especially when keyboards and samples were introduced it contributed to the epic characteristic "Elizium" sound.

After that Elizium became quickly familiar in the local underground scene and the first demo was recorded; ‘War and Knowledge’ (1995). One of the songs of that demo (‘I Follow’) also appeared on a compilation cd and several gigs followed.

In 1996 the band members went their separate ways and Berends, Röge and Manoch individually played in several other bands,only to find out they each missed the atmosphere and belief they had in Elizium.

Thus after three years they decided to bring Elizium back again. Soon after that Erik Dijkstra joined on keyboards. Intense rehearsals followed and already after one week it was clear that Elizium was back at full strength with the birth of their first new song ‘Rape of Creed’.
New songs followed all tied together with still that old ‘Elizium–sound’ but this time more mature and more dramatic, glorious and painful.

In 2002 Marco Snoek replaced the former bass-player and became a member of the current line-up.

In 2003 the recordings of the ‘Angel of Mistrust’ demo-cd were finished and received enthusiastically by hundreds of people.
2005 was an important year for Elizium. After a period of relative quietness, due to the tragic death of an important person to Elizium, named Peter Deurloo, a record contract was signed at German STF-Records. It was then decided to release the re-recorded full demo including four extra songs to distribute worldwide.
On February 13th 2006 'Angel of Mistrust', the debut album of Elizium was released and received good reviews internationally.

In August 2006 Marco Snoek decided to quit playing in Elizium to focus on his family and company. Michel van Beekum followed him up, and found a worthy successor in Michael Paap who took over the Bass in 2009.

In 2010 the recordings started for the next Elizium album, named 'Relief by the Sun', to be released in 2011 by STF Records. A number of video clips are launched together with the new album, starting with 'Violent Flower', a song about a serial killer.

Nowadays Elizium stands as strong as never before and is ready to bring the experience to the masses...