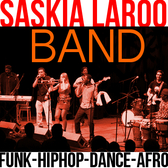 The Saskia Laroo band features a multi-national cast of musicians, playing original compositions from her albums. Their music is a combination of jazz, pop, world and dance music, consisting of stylesdriving rhythms, powerful rap, and intense solos; an improvised mix of today ‘s electric and acoustic groove music with respect to tradition.
Press quotes
"Laroo plays the stars out of the heavens, while her grooving band trundles on, fiercely propulsive. It is funk, jazz-dance and hip-hop in one." read more By Stan Rijven for Dutch national newspaper Trouw Oct 17, 2014

“This was one cracking concert from the first note, Saskia Laroo and her band hit the stage runnin, offering a dizzying repertoire of jazz, rap, hip-hop, salsa, drumn ‘bass and soul.” read more
By Audrey Perera, The Straits Times, Singapore March 11, 2008.

"Saskia mixes styles of music and culture as if they had always meant to be together
By J. Lyon Layden, in Creative Loafing, GA, USA February 2001.