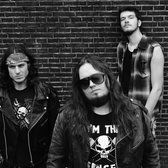 JINX the Hard rock & roll machine from Amsterdam was founded in 2003.
JINX is a power trio who picked up a lot of experience by rocking bars, clubs, festivals and halls in the Netherlands, Belgium and Germany. With their tight drum and bass lines, raw rock vocals and heavy guitar riffs they make you want to lose control!

Their first album ‘Rock City’ which came out in 2014 received praising reviews from Dutch/Belgic metal/rock magazines such as Zware metalen, Lords of metal and Rock XXL.

The image they send out to the crowd is that they breathe rock and roll and come from the streets of Amsterdam, JINX has that reputation in the Netherlands. They never give up and never surrender.
JINX stands for kick ass rock & roll straight from the heart!

JINX already conquered several well known clubs/halls/festivals in the Netherlands and Belgium such as Paradiso, de Pul, P3, P60, Scum, Red skulls support 81 fest, the Cave, the Waterhole, Panique d’O (BE), Section Metal (BE), Oude Ketel (BE) and many more. They stand for the true meaning of rock & roll wich is stand for what you believe in and always follow your own believes.

JINX has been rocking the Netherlands for quite a while now and is planning to go global to seek their fortune in the rest of Europe and further. If you are lucky they end up at your doorstep. JINX is here to stay and they’ll never go away!

Make sure to check out their kick ass songs on youtube like though love and many more!! At the moment JINX is working on their second album a video clip and many more stuff that will blow you away!!

Creature Of The Night