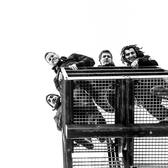 QUARTZITE is an extremely compact, granular rock, consisting essentially of quartz.
"That’s what we want our music to be."

The sound of this ensemble explores between boundaries of the classical-contemporary music, jazz and rock. The explosive energy is reflecting in their highly structured compositions leaving space for adventurous risk taking moments and no-holds-barred improvisation. The band created it's own style and genre.

Quartzite is vibraphonist Marko Jugovic, saxophonist Wietse Voermans, bassist Alessio Bruno and drummer Elvis Homan. The quartet met while studying at Codarts, University of Arts, Rotterdam. They became friends- than lovers, than even something more and basically became a rock; QUARTZITE!- and converged together as Quartzite in 2015. Each member has an impressive list of credits accomplished over the years. The band has continued to thrive and grow in reputation, solidifying a fan base in Europe.
Quartzite draws upon influences of the intense sonic landscapes of Steve Lehman, dramatic narrative depth of Vijay Iyer, massive boost from Meshuggah and techniques used in contemporary classical music.