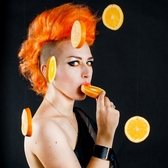 Kate Orange is an electro pop singer producer and one of that new generation of DIY artists.
In short her music is the mixture of pop, rock and electronic music, based on Ukrainian vocal melody and 80's inspired sound of Depeche Mode and Krafwerk.
Very often the udience compare Kate with Lady Gaga, and Róisín Murphy.
Main instruments: Ableton push, vocal, bandura.

“When I was a child and a teenager music always played at our home. My father played guitar and I pop-up at the stage for the first time with him when I was 5. We had a cool audio system at home and listened to Sade, Michael Jackson, later Kylie Minogue, Queen, Pink Floyd, who inspired me a lot and mainly these artists were my music teachers together with the classic music education”.

In the period from 2001 to 2006 Kate participated in vocal contests in Ukraine which she mostly won. In her native city Kherson Kate even got special award: “The Golden voice of Kherson”.
From 2006 to 2011 Kate actively performed in Ukraine as a singer and a vocal DJ visiting a lot of big cities.
In 2011 Kate moved to the Netherlands and immediately signed a contract as a DJ and producer with Inclusivo events which then organized events like “Hypnotize at the beach”, “Lashed”, “House religion”.
The same year she released her DIY electro pop album “Stereo Radio”.
The main single “Stereo radio” was featured in Madrid’s main TV channel Kanaal 3 with David Guetta playing it.
After this album and having ended the contract with Inclusivo Kate started to manage her solo career, mainly as a singer.
In 2013 Kate performed mainly as a singer on Salinas at the beach by Melody production, Luxx
club in Rotterdam, Escape Amsterdam, Noxx - Antwerp and many more.
The same year she also became a finalist of Rotterdam Grote Prijs contest as a producer.
Year 2015 became a year of changes and music reconsideration.
Kate started to co-work with other musicians and built up the whole electro pop show which was kicked off to the audience in May 2015 in Rotterdam.
Also, she graduated from the sound engineering department of SAE school .

Summer 2015 was remarkable due to participation in “Taribush Kuna” festival in Drenthe, “Boodgike” festival in Veendam, “Make-A-Wish” project in Meerhoven and Sliedrecht.
In November 2015 Kate released her #WhisperMyName single together with social and charity campaign for kids with Down syndrome.
Thanks to this song Kate Orange was featured in “Music Magic” - on omroep Almere (Almere’s radiostation), Zienester - Dutch music blog. Stozharu - Ukrainian magazine in the Netherlands.
Now Kate works on arranging a show tour across Europe in 2016.