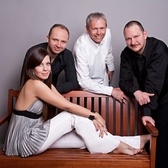 E.K.Avenue has been performing since 2009, featuring jazz singer/songwriter Erika Kertész alongside other well-known Hungarian musicians. The members of the band are:
Róbert Rátonyi – piano
Péter Szendőfi – drums
György Frey/Gergő Kolta – bass guitar
The band’s music consists of Erika’s own compositions (including the English lyrics). Péter Szendőfi and Róbert Rátonyi, who have arranged most of them, expertly bring out the songs’ funky blend of jazz and soul mixed with elements of electronic music.

They have played numerous concerts in Hungary and throughout Europe, including in Austria, the Czech Republic, Slovakia, Croatia, Germany and the Netherlands. Highlights of their musical journey include performances in the Vienna Jazz Festival, the Liburnia Jazz Festival, and the Gronau Jazz Festival.

In 2012 they toured the Czech Republic and Slovakia, playing 14 concerts in a row. In Hungary, they perform frequently in the main jazz clubs and festivals, and have played in many cities and towns outside of Budapest.

In September of 2015, they recorded their second CD, called Moonbike, in the TomTom Recording Studios in Budapest. The album will also be released by mTon, and will be available in January of 2016. This time, the guest musicians are New York based saxophone player John Gunther, and József Czibere on percussion.

Flying through the storm